Looking to the past for truth requires faith not fact. Historians preach history indexed by metadata: location, date, some names. The context of events, the real substance behind the pointers, becomes portioned and skewed into puzzle pieces that have their edges filed down. The full view becomes dispersed between geopolitical frames of reference, all attempting to shape the future in the present using fractions of the past.

An ascertainable Fact: When one nation attacks another. The unascertainable context: Why? And here lies trouble on the timeline.

What threatens truth is not the lie, for the lie can be disproved. Which is why Orwell gave the maxim: ‘the greatest form of lie is omission’. This is true because it’s not a lie. Through omission the past moults like an inside-out dog. History is stripped of its vitals back to an advent dimensioned by a coat: location, date, some names. Reflection becomes rendered myopic and pertinent only to contemporary motives. This would be fine if it could be agreed upon what to omit. At least then reality would remain shared and society somewhat stable.

The great consequence of omission occurs when shared reality is rived apart from disagreements between those seeking precedents for future permissions. The past is split like a T junction which divides the future along paths of mutually exclusive facts. A mutual and foundational reality that allows for debate, discourse in reason or logic, eventually becomes irreconcilable as people begin to co-inhabit and adapt to functioning in a post-fact world.

Tolerability for split reality depends upon the echelon of social division this schism takes place. Whether it occurs at the civilisational, international, or national level.

Civilisations, East and West, are large enough social divisions which can isolate respective realities from each other. They Large enough to manage internal dissonance and most importantly, have sufficient communicational barriers between them to manage cross-chatter interference. Communications isolation between the two allows both to simultaneously persist as universal truths. Communication advents such as printing press, radio, and internet; have destabilised this parity in favour of the West, though both remain strong to this day within their respective blocs.

Recently, since the advent of the internet, it’s been the loose social controls within Western Democracies which has made them most vulnerable to internal schisms in mutual reality. This has caused them to adopt more stabilising traits of the authoritarian East, who have also been actively exploiting this weakness in Western values.

The problem of destabilisation becomes acute, rippling upwards, when divergences in reality occurs within a nation itself. This level of social division cannot be sufficiently insulated from itself to allow the occupation of separate realities.

Civil unrest within a nation mounts if split realities are forced to confront one another, becoming more and more untenable as discourse devolves and eventually desists in leau of violence.

Direct kinetic action becomes potent, almost exclusive, as a means for effecting change. This can be advantageous for governments as have a monopoly on violence. And divided interests amongst the populace rarely unite against a common enemy when highly inflamed.

However, an ongoing volatile civil environment leads to an unstable business one, which then becomes a problem for the backers of government.

The remedy to a divided national reality is the creation of a new hybrid moderate or centrist reality. This fresh alternative reality, ostensibly presented as an amalgamation of truths from both sides, attempts to stitch split realities back together through further omission of the truth, which is necessitated by compromising between half-truths.

It is at this point the ideologies cultivated within mutually exclusive realities are encroached on in an attempt to stabilise the schism in reality back into a somewhat monolithic state. The new ideology for achieving this is described in various slogans: Coming together. Ending divisiveness. A need for rational and practical compromise. Rising above partisanship. Reaching across the aisle. Centrism. Moderation.

Tragically though, the centre cannot hold when operated by unwitting nihilists who, while shamelessly earnest, come thinly draped in the flesh cut off ideals freshly slaughtered. If only they could replace their eyes as they do their teeth. As it is through these the Moderates deadness shows.

Centrists come to realise they believe in nothing but a process. Means but never ends. Means that justify an exorbitant fee for lack of any other ends. Without a care for any ideology they mediate between, their ends can be nothing but pecuniary.

This means-based ideology is the cause for mass existential crises once adopted by enough people who eventually realise it leads nowhere. Upon this realisation and to escape the emptiness of it they must flee, quickly and in mass, back to their split realities, that had at least provided hope, however hopeless. The quickest of these people to flee carry the greatest portion of the centre with them in the trail of gravity from their exodus. This rapid abandonment of the centre renders nations schizophrenic and prone to self-harm. Great segments of society become trapped within a body whose mouth speaks against them, whose limbs move to bind them, and the erg to kill oneself becomes invoked.

It is omission of truth which will lead to the decline of Empire in nuclear age. Most terrifyingly, the only clear prevention is the complete suppression of truth into a highly controlled and rigorously enforced totalitarian reality. And it would appear those countries most rapidly evolving towards such models are universally though to have the greatest prospects of forming new Empires in place of those which cannot adapt.

Past Empires surcame to their peripheries from which once flowed tribute, but who like hernias began to encircle at the first scent of decline. Expansion then contraction.

Projected power is just that. The Ottomans were the last Empire to observe this in, and the Eastern Question was asked long before it was eventually answered by the merchant-banker committees in Paris. But in the nuclear age, such a deterrent as that of mutual assured destruction suggests the only deathblow to Empire can come from its centre.

And so the Anglo-American Empire rests as a warm body in a tub with a razor at its vein. Much of the world watches on with morbid fascination, some whisper do it. Others wait silently in awe of this great beast slowly buckle beneath its weight.

Four years suggested such desire and four more would’ve shown no regret. An unconscious reckoning for quick death. Not yet as there’s hesitation toward the centre. But the centre never holds. 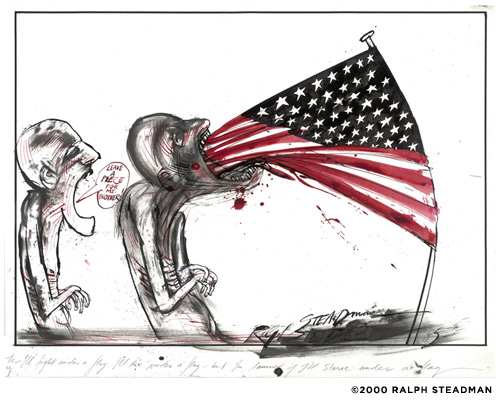