NOTE: paedophilia was often conflated with homosexuality by news and law enforcement agencies in the 1970s. Thus, many of the sources used, such as police reports and news articles, will characterise crimes such as the rape, torture, and murder of children as homosexual ones. The men involved in such crimes, in most instances, did not have sex with other men at the peer level. Which is to say, they were pederasts or paedophiles, not homosexuals. That said, the homophobic slant given in police reports and news articles at the time these crimes were committed, should not preclude them as evidence of the crimes themselves. As they are the only pieces of evidence we have.

September 1976 — Reels of child pornography discovered by technicians in a broken down commercial film processing machine in Dallas, were traced to a man in New Orleans named Harry O'Cramer, who had been the assistent-scoutmaster of a boy troop there called Troop 137. Boys and scoutmasters from this troop were subsequently identified in the films, which led to the arrests of three other men: Richard Halvorsen, Raymond Woodall, and Robert Lang.1

The home of Richard Halverson, the Scoutmaster of Troop 137, was raided on September 10th, where found living with him in a “Delta Dorm” arrangement were two foster children, both boys aged nine and eleven, and a eighteen year old named Lloyd Schwegmann, also arrested for possession of the date rape drug Tuinal and contributing to the delinquency of a minor. Aside from child pornography, police seized index cards listing the names and addresses of boys from other states, aswell as computer generated forms detailing sexual preferences and personality types.2 Dectectives stated the materials had been used to facilitate the interstate traffick of boys through mailing lists and advertisments placed in pornographic magazines.3

Discovered in correspondence Halverson had maintained with other pedophiles across the United States, was a letter written to him by Cladius Vermilye, personally inviting Halverson to visit his Boys Farm in Tennessee.4 This is what had served, along with information gathered from Gerald Richards in the North Fox Island investigation, as the basis for the raid on Vermilye’s foster home a few months later in November that year.

Other files revealed Halvorsen and another scout leader named Raymond Woodall, also arrested on September 10th, had been in the process of applying for federal and state funding to establish a number of group homes for boys in New Orleans themselves.5 And inside an address book belonging to Raymond Woodall police discovered John Norman’s name, who at the time continued to operate the Odyssey Network from inside an Illinois state prison.6 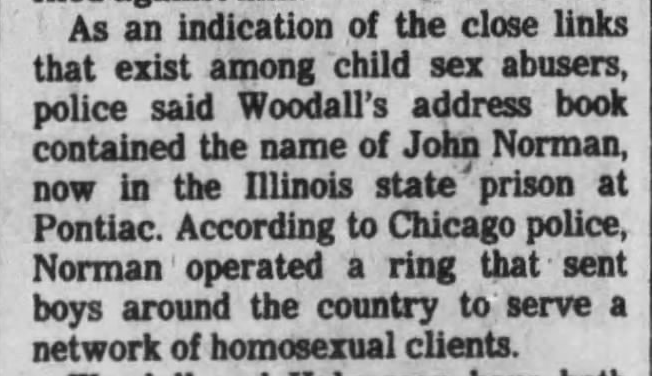 Further investigation revealed both Halverson and Woodall had previously worked at a private children’s school in Florida called Adelphi Academies, owned by a wealthy individual named Peter Bradford(possible moniker).7 They had moved to New Orleans in the early 70s and somehow became juvenile probationary officers, positions they used to access, and in some instances even reactivate, case files on juvenile offenders. They would then use this to leverage offers to the offender's family of ‘sponsored’ scholarships to the Adelphi Academy in Florida. At least six boys from New Orleans were trafficked to Florida in this way, where they were used for sex and pornography. The academy's owner, Peter Bradford, was charged with having sex with one of them, but in New Orleans rather than Florida.8 This had allowed Bradford to forfeit his bond instead of his time by simply returning to Florida where he faced no charges.9

Then in 1974 Halverson and Woodall chartered Boy Scout Troop 137, made up of around forty boys, from which ten or so had been groomed as child prostitutes and made available to an expansive network of wealthy clients located right across the United States.10 Aside from Peter Bradford in Florida, there was a Californian millionaire named Robert B. Mallers. In Boston the president of a large real estate holding company named Hugh Mellor, and also from Boston a financier/industrialist named Richard C. Jacobs, who had been a former minority-owner of the New England Patriots NFL team.11

All up around twenty men were charged, either as accomplices or clients of the Troop 137 ring, but not all of them were prosecuted. Many of the wealthier involved, such as Peter Bradford and Richard Jacobs, absconded on their bonds and never saw the inside of a jail cell.12 Which has been an unsurprising and reoccuring theme in this series of cases. When parts of the network are exposed, the high powered individuals at the top leave their pedophile associates at the operational level below to fall on their sword. Which is of course why those at the operational level then blow the whistle on a much larger network managed by, and catering to, a powerful class of wealthy men. As had been the case with Gerald Richards in Michigan, and as we will see in this instance, with Raymond Woodall in the case at hand.

The flurry of connections in the Troop 137 case got a little more bizarre when the district attorney who had prosecuted the men involved, named Harry Connick, was later implicated in court testimony given by one of his own witnesses, a pedophile associate of Raymond Woodall’s named Lewis Sialle, as having been the lover of another pedophile linked to the ring, a New Orleans artist(child pornographer) named John Reed Campbell.13 Harry Connick denied the nature of the allegations, though admitted to having known Campbell as a "political supporter" during his campaign for office.14

Then in April a newspaper reported Connick and John Campbell had met shortly after Campbell's home had been raided by detectives investigating the Troop 137 ring, and that three days after this meeting, Campbell had fled New Orleans. In response to this Connick then subpoenaed the newspaper in question, The Times-Picayune, for all materials relating to the source of this information.15

Ten months after John Campbell had fled New Orleans as a prime suspect in the ring, charges were laid against him, thereby making him a fugitive. A number of years passed, then sometime in 1980 he was picked up by the FBI in Arizona and brought back to New Orleans for prosecution. His case had been initially assigned to Connick, who had handled all the others related to Troop 137. However Connick reassigned it to another prosecutor sometime after Campbell told a judge he had known Connick, "for several years, as a personal friend, a legal adviser, and as an active campaign supporter when Connick ran for office".16

The first of multiple charges brought against John Campbell had been dropped in May 1980 while Connick had been assigned to his case. By 1982 the prosecutor Connick reassigned it to had dropped all remaining charges.17 John Campbell had gone from prime suspect, to fugitive, to free man. Perhaps lending some validity to Lewis Sialle's claim Connick had infact been intimately involved with John Campbell in some way.

While by no means presented as a reliable source, an article in the pedophile advocacy publication NAMBLA, which had been covering the case in New Orleans, claimed John Campbell had sexual blackmail on Connick.18 Granted, NAMLBA, an institution just as eager to indulge the conflation of pedophilia with homosexuality as police and media at the time, had more than enough reason to smear Connick, who had secured lengthy prison sentences against Richard Halverson, Raymond Woodall, Harry O'Cramer, and Lewis Sialle; men NAMBLA claimed were persecuted homosexuals.

The most interesting of aspect this case however, which unsurprisingly got the least attention, came a year earlier, when the same newspaper subpoenaed by Harry Connick reported the Troop 137 ring had also operated a VIP “tour guide service” which supplied out of state politicians with boy prostitutes.

In November 1979 Raymond Woodall, who had been sentenced to a 75 year prison term19, sent a letter to the Times-Picayune regarding information which hadn't been made public about the case. It was reported Woodall and another man picked up in the initial Troop 137 sting, named Robert E. Lang(possible moniker), had supplied out of state politicians with male prostitutes under the guise of a tour guide business called Adelphi tours.20

While Woodall had claimed the service only used legal age prostitutes, Lewis Sialle, the same witness who had implicated prosecutor Harry Connick, stated, “The service started out using adults, but they began ripping off the customers. That's when Woodall said we could use the kids. They'll get $50, a good meal and all that jazz. The customers will enjoy themselves and everyone is happy”.21

New Orleans detectives confirmed they had investigated this tour guide service in question, and that Harry Connick's office had been aware of this, but didn’t pursue it as the individuals involved had already been prosecuted on other charges, while also stating the US postal service prevented them from accessing the P.O box used to facilitate it.22

However, Robert E. Lang, the other man mentioned, and one of the inial four scoutmasters of Troop 137 arrested, received a suspended sentence.23 Raymond Woodall was given 75 years. Richard Halverson 30 years.24 Harry O'Cramer 45 years.25 Robert Lang— none.

Interestingly, detectives who had investigated Robert Lang had gotten the impression he had been an intelligence asset, based on evidence they found indicating Lang had served as an officer in four separate branches of the United States Military. They also mentioned rather bizarre ‘artefacts’ which had been collected by Lang and the other men, including jars of children’s urine.26

Child trafficking. Political clientele. Intelligence links. Jars of urine. All things which parallel another child trafficking ring busted in 1987 dubbed The Finders. Which we will eventually get to once this series bleeds into the 1980s. In the next part we revisit North Fox Island, and series of child murders at the time in Oakland County Michigan.

And so it grows. 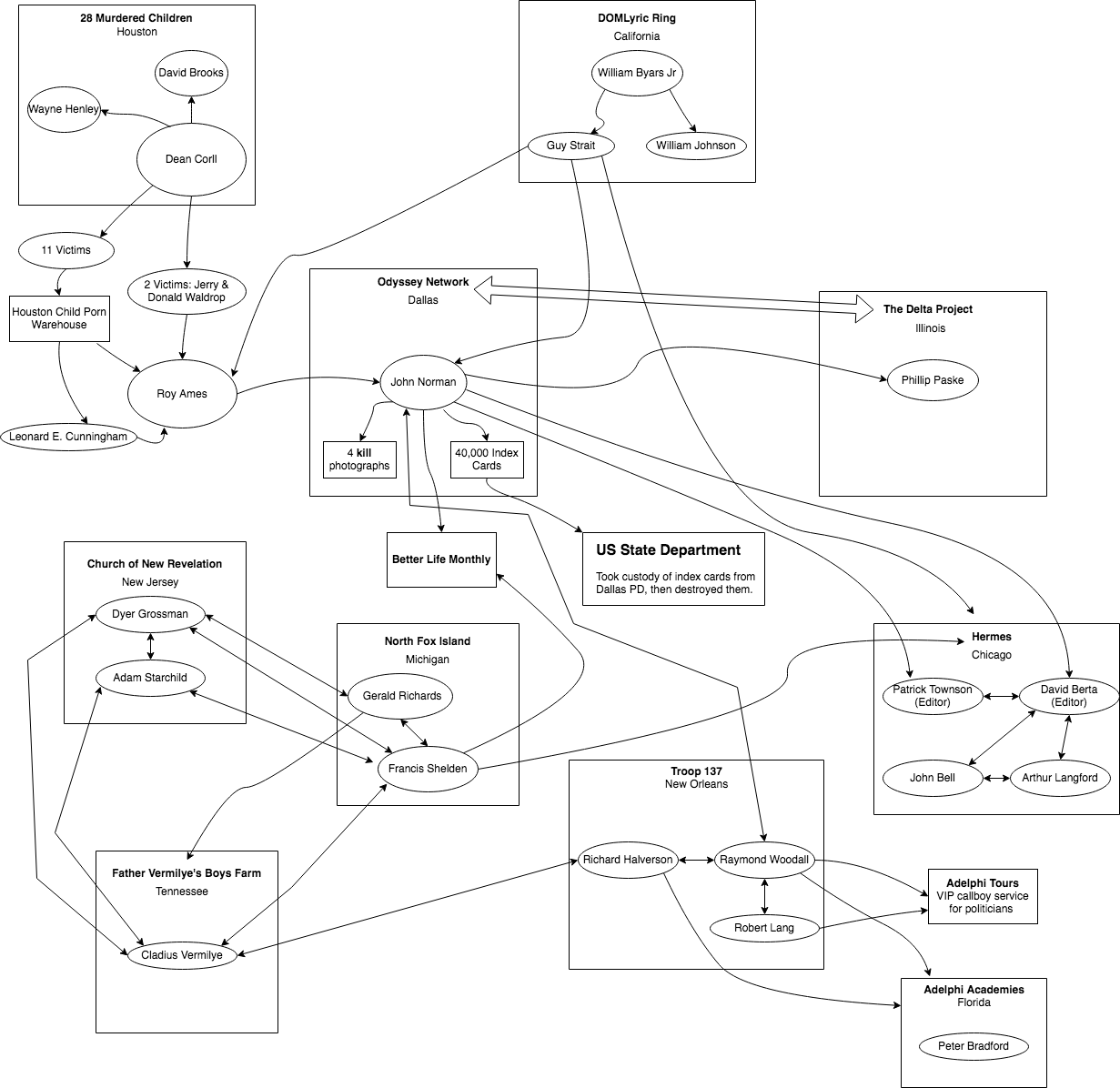